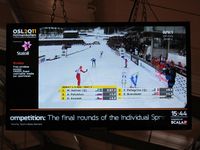 Scala Software was at the heart of this year’s Nordic Ski World Championships in Oslo, Norway.  This year’s championship attracted a total of 1,2 million spectators during the 12 competition days, divided into stadium spectators, those along the outer cross-country trails and those at the evening ceremonies in the city center of Oslo. 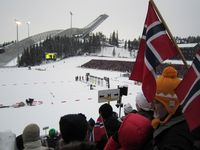 Scala Norway in cooperation with Scala partner Datametrix installed a temporary network for the duration of the tournament, consisting of 300 screens, powered by Scala Content Manager Software and 80 Scala Player Software licenses.

The screens were spread out over a great variety of areas, like cafeterias, ticket offices,

the central information center, repair and maintenance stalls on the sports courses, the judges’ tower at the ski jump stadium, the press centre, help and infirmary centers and the royal box in the stadium.

Scala Services created all templates for the Digital Signage network. Because of the intuitive templates it was possible that this large network was run by only 6 people, who have had just 4 hours of training in using the templates. Additionally Scala has build the integration to a streaming/IP solution and the integration with a Norwegian weather service for this event.

The 300 screens were all provided by Samsung and varied in size from 22 to 55 inch, but the main screen was a Samsung 46" DXN. The main displays were divided into 3 frames. The bottom frame displayed information from

an RSS feed. The left frame consisted of the tournament program, the competition results and useful visitor information. The main frame of the display consisted of a live TV stream covering various the games.